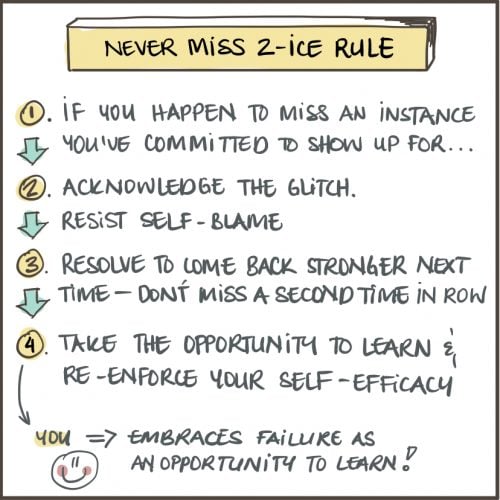 My belief is that James Clear coined this tactic first in his Atomic Habits book. He calls it the Never Miss 2-ice rule.

I’ve used it many times to (as the title says) fortify my own self-efficacy. And I’ve taught it to many others who are in the throes of creating a new behavior in their lives.

It works every time you remember to employ the rule. Even if you’re fully aware that it’s just a gamifyer!

It takes all of 2 seconds to remember but its power is prolific.

I have an added bonus to share with you on top of James’ original. But first – shouldn’t we answer what the rule actually is?

Is very basically – to make a decision, or a contract with yourself that in the process of creating a new habit/behavior you will try your best to show up each time you should show up.

But because life isn’t all smooth and convenient, when a genuine glitch prevents you from showing up one time, instead of beating yourself up about it, and then proceeding to give up on trying again (cause you’re such a loser).

You accept that this has happened. You don’t self blame. You resolve to not miss the next occurrence, and instead, to show up even stronger than before!

And now – let’s talk about…

What’s the Point of the Never Miss 2-ice Rule?

To Gamify Your Consistency

The most obvious reason to use this rule is to gamify your consistency when building a new habit. It’s a fun way of incentivizing yourself to show up every day in order to keep your running streak. This is basic psychology – that’s why it works so well.

Which leads me to the second reason why this is a powerful habit creation tactic.

It gives you an understanding that life isn’t going to work according to your plan all the time – so it cuts you some slack for being a normal human with ever fluctuating demands on your time and attention.

That way – when you fail to show up one time – it gives you a license to redeem and fortify your self belief, instead of grinding you into the pavement with guilt and blame.

The only way to redeem yourself for failing to show up once – is to prevent yourself from not showing up 2-ice in a row!

Failure = an opportunity to show up stronger, to learn & to grow.

Which leads to the third benefit of this Tiny Little Action: by having the never miss 2-ice rule, you can re-pack your energy and invest it into showing up the following time.

Firstly, you recognise the mishap. And immediately and neutrally (meaning without self-blame) load the action to make showing up a priority tomorrow.

Then you ask 2 critical questions (my bonus to you from James’ rule):

Now you’re using failure (technically speaking) as fuel to prove to yourself that you’re strong-willed and CAN show up. Now – you’re the type that uses failure to get stronger. You’re building a habit AND you’re getting stronger.

Sometimes you won’t have new insights (although in my book, that in itself is an insight, i.e. you’re repeating your mistakes!).

It matters not – it’s just another gifted opportunity to learn.

And the bottom line here is that you learn to embrace glitches because you know that:

each crack in the perfection you’re trying to achieve, can shine a light on how to do even better next time :o)

It also shows you that you can deal with stuff, that you’ll find your way most of the time and come up better than before.

Now – you’re the type of person who embraces failure.

Your Call to Tiny Little Action

Do you have a behavior/habit you’re working on creating at the moment?

Can you see yourself enjoying this gamification TLA?

If you already use an app or a spreadsheet to track your consistency – could this tactic enhance how you view your journey from no to a pro?

Are you already using this rule? If so – how are you finding it, and have you modified it in any way?

Please let us know below – so we can all learn from our collective experiences. 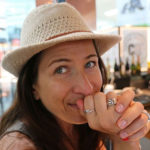 PrevPreviousN-S.D.R. – the best free 20min investment for cognitive detox & protection
NextNever the Naked… Use This TLA to Get More Value from Every Interaction & Experiment.Next